Earjam (2000-2004) was a new music festival of LA, featuring LA based solo artists and groups, earbending innovation each evening which culminated in all cast improvised jams. It was launched in 2000 at Side Street LIVE downtown and curated and produced 4 different times by multi-media artist Jacki Apple and myself. I also performed on each Earjam. The music presented ranged from free jazz to experimental funk, to microtonal ambiences, from acoustic/electronic hybrids to hand made instruments to computer driven ones, from classically based vocals to out of this world vocalese.

‘Brings fringe to the foreground,’ writes Josef Woodward for the LA Times. “Producers Julie Adler & Jacki Apple have fashioned an eclectic sonic cavalcade…The festival’s real value is the connective tissue it provides to the region’s cultural fringe dwellers. It brings the underground into the light.”

For the very first Earjam, at Side Street LIVE downtown, I performed ‘Frog the Moon‘, a solo accapella vocal piece based on a poem from Anne Sexton’s book of poetry, ‘Transformations’. This piece is an exploration in visceral kinesthetic and vocal manipulation to express loss, repugnance, hope, fear in the body and in the voice. This piece was a segue into a series of works threading together journeys both personal and exponential.

The second Earjam was also presented at Side Street LIVE, downtown LA. Here, I presented original works with flutist Fawntice McCain. Along with subverted chant based on a Sanskrit prayer and also a little dittie called ‘In a Field‘, I introduced a new composition of structured vocals and flute, weaving it into ‘Eternal Valley‘. As a codified ‘valley girl’, I wondered about the pebbles of the cosmos, the stepping stones and the ‘furnace’ for us all.
In a Field:

The third Earjam took place at the Furious Theatre Space in the Armory Northwest in Pasadena. Here, I accompanied composer David Javelosa and cellist Peter Ludwig on David’s composition,‘Marzimba BBQ’ which is a fluidly arranged structure for voice, cello, harmonica & computer/synthesizer system. The term ‘Marzimba’ is derived from a ‘marimba from Mars’ with textual imagery derived from summer travels through the barbeque belts of America.

Earjam IV was presented at REDCAT and because of the scope of this particular production, I donned primarily the producer’s hat but managed to slip into the role of vocalist on composer Becky Allen‘s piece, namely, ‘Ocean Wave Swell Heights’. 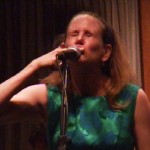 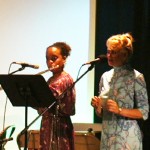 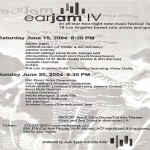 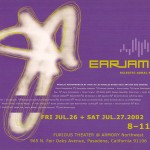 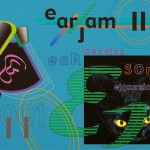 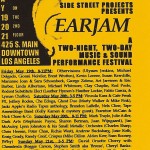