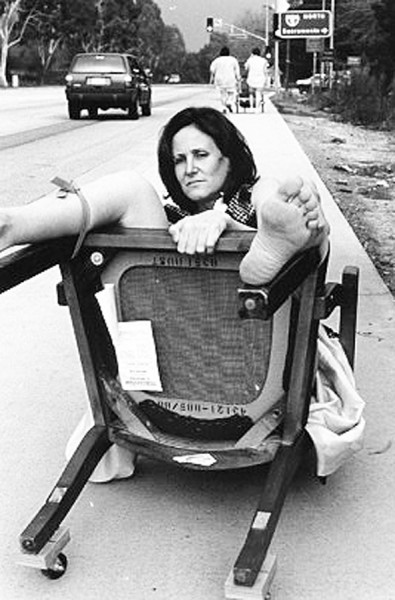 Julie Adler is a visual and performance artist who uses a multitude of mediums including painting and drawing, music (composition and voice), installation, and video. She holds an MFA in Visual Arts and Music (voice) from California Institute of the Arts and BFA from Cooper Union in New York. She also did a residency in Paris at the Ecole Nationale Superieure des Beaux Arts, in the atelier of Annette Messager and with additional guidance from artist Mona Hatoum. As a performance artist, Julie has created and performed numerous works which include: ‘Nothing Is Broken’, a portable mini-opera for two premiered at REDCAT, ‘Of its W(h)OL(e)yness’, ‘Inbedded’, and large-scale interdisciplinary theatre piece, ‘Philomela’, based upon the Greek myth (as told by Ovid in ‘Metamorphoses’). Projects have been presented at REDCAT, Cal State Long Beach, Cal State Fullerton, Side Street Projects, Armory Center for the Arts as well as such LA based performance staples as Highways and Beyond Baroque.

She has also collaborated with other performing artists – musically scoring theatrical works to choreography, and participating in recitals, concerts and operas, from California to Australia. For a few years, Julie also co-produced (with multi-media artist Jacki Apple) ‘EARJAM’, a Los Angeles based new music festival that included most of LA’s experimental music community, and she created ‘Vocal Lounge’, a monthly music/vocal series as well. In addition to her performance practice, Julie has created a growing body of paintings and drawings which have been exhibited at such places as The Situation Room, Suzanne Vielmetter Los Angeles Projects, JAUS and Campbell Hall Gallery.  Her paintings have been featured in VICE Magazine and she is the recipient of a Vermont Studio Center fellowship and was a featured artist-in-residence at Campbell Hall School in Los Angeles.